Took a Buell for a demo ride today 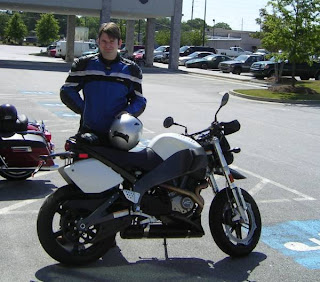 Buell is having a promotion: Test ride one of their bikes and get a free messenger bag. So I thought I'd give this a try. I stopped by Granite Mountain Harley-Davidson, and sure enough, they let me take a Buell XB12STT for a test ride. This one's sort of halfway between a Lightning Long and a Ulysses, with a tall seat height and styling influenced by dirt bikes. I've read about Buells before, and sat on a few at motorcycle shows, but never had the chance to ride on one.
So, how was it? My first impression was that the sitting position was just plain right, a comfortable, upright position with my feet under me but nothing scrunched up. And the exhaust note definitely had that Harley sound to it. Then I let out the clutch - and found it was a bit hard to make this thing just accelerate gradually. I've got enough experience that I could keep it under control, but not enough that I felt comfortable with the kind of power this bike makes. I don't think I ever gave it more than half throttle when following the salesman (who was on a V-Rod) around the set of roads that they use for a demo course.
It's definitely a fun bike. The trouble is, with gobs of power available just off idle, it just wants to go fast, and you have to make an effort to reign the power in. It takes off like a rocket, that rim-mounted front brake can bring it to a stop so hard the salesman warned me about it before the test ride (although I didn't find the brake nearly as hard to manage as the throttle), and yes, it's definitely meant for cornering. For someone with a bit more experience and a steady hand on the throttle, it would make a great real world bike - no uncomfortable riding posture or anything, although you need to be pretty tall to get both feet flat on the ground. For me, it's more bike than I felt ready to handle.
So I thanked the salesman politely for the ride and went home with a new messenger bag. It's a pretty good quality bag, too.

Famous cars from Hot Rod Magazine: Where are they now?

When I saw a gunmetal gray '66 Charger show up at the Stone Mountain Cool Car Festival (yes, I'm still posting my stash of pictures from there!), I thought it looked familiar. Sure enough, it was none other than Steven Strope's project car, Skully. This car was named one of the top ten hot rods of the year when it came out. 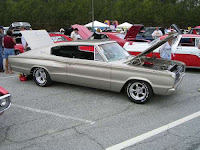 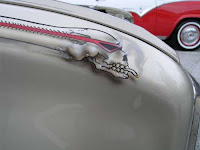 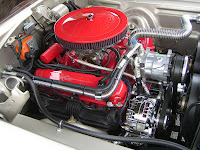 I noticed the current owner has made a few changes. It's now rolling on smaller Torque-Thrusts instead of the large billet wheels, and I've noticed a bit of chrome creeping into the engine compartment. I really liked it better the other way, as the wheels and Pure Vision's chrome-free engine details were really two of the things that set it apart. However, you'll notice Skully still has her trademark pinstripes, and the air conditioning is definitely an improvement.

A little bit of work on the Dart: MSD installation

I stopped by AutoFab a couple of times this week when things were going slowly at work, to do a little wrenching on the Dart. At the urging of Scott "DieselGeek" Clark at Spectre Performance, one of the most experienced MegaSquirt tuners out there, I decided I was going to put an MSD-6A box on the Dart to give the ignition some more power. The box is going to fire the MSD Blaster High Vibration coil I had lying around from my ill-fated attempt to try out automotive coils on the CX500. I've decided right now to set it up so the HEI-7 module triggers the MSD. Well, now it's on there, except the big fat power and ground wires, which we will deal with when getting the trunk mounted battery set up.

Installing the 6A box is pretty easy, especially since AutoFab happened to have a much better crimpers than any of the ones I have at home. I cut the factory positive coil wire - only the second of the factory wires I cut to install Megasquirt - and teed it to the positive terminal on the HEI module and the MSD box's red wire. I hooked up the white wire to the HEI module's negative coil terminal pin with a spade connector, and used another spade connector to attach my tach to the MSD tach output terminal. Then I just had to crimp ring terminals on the black and orange wires, swap out the Accel coil for the MSD one (actually, the Accel coil might have worked too), and put the coil leads on there. There's only two other wires, which would normally be equally easy to add. However, I don't have all the power and ground distribution set up.

I'm planning on changing this MSD setup to crank triggered later - that will be a real challenge.

My favorite kind of supercar

I remember once reading an essay in Car and Driver about when brand management is a good thing. Brand management with cars is easy to go horribly wrong - look at how GM tried to market mechancially identical cars with similar performance to different niches in the '90s by just changing the sheet metal and advertising campaigns. But there are some times that brand management can make sense. For example, Honda decided that they would make a half price Ferarri with their Acura NSX. Unfortunately, when they got it to the market, they found that there wasn't much of a demand for a half price Ferarri. More people buy Ferarris to impress the neighbors than to drive them to the full extent of their capability, and you don't impress that kind of neighbors by getting things at half the price.

But if you can get all of the real things that make exotics good - mid engined, high revving DOHC V8, light weight (which these days doesn't even apply to all exotics - there are some out there that make a Chevy Caprice look light), a good chassis - and build it for less than a tenth of the price of a Ferarri in your own garage, you've got something. 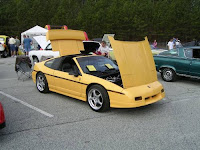 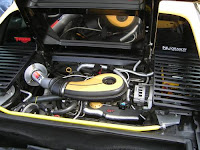 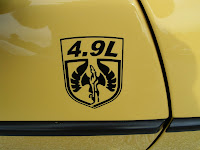 Here's a Pontiac Fiero with a Cadillac Northstar V8. It may not impress your snobbish Beverly Hills neighbors. But it sure impresses me when a gearhead builds his own version of an exotic without breaking the bank. 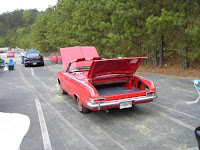 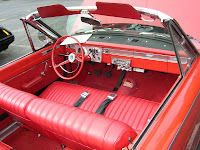 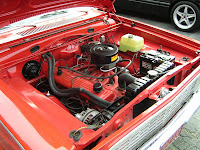 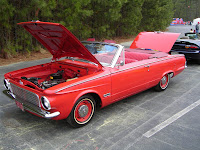 Most of the people who show off their cars at cruise-ins and similar events for classic cars bring V8s. Mopar fans are somewhat more inclined, if you'll pardon the pun, to bring six cylinder cars than their Ford and GM rivals. Two people at the Stone Mountain Cool Car Festival decided to bring slant sixes, in an early Barracuda (above) and Corronet (below). Being a fan of the Leaning Tower of Power myself, I had to get these two slant sixes out on the blog. 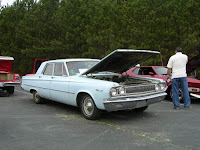 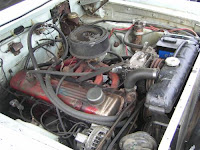 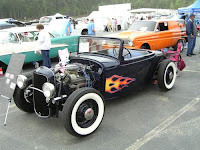 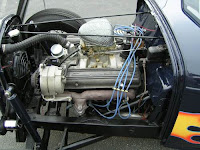 Yes, I've got a lot more pictures from the Cool Car Festival stashed away for slow days. Normally I'm not very big on the '32 Ford with a Chevy smallblock. Sure, the Mouse is a pretty good option for cheap power. But this combination has become something of a cliche. Sometimes I just want to see somebody commit an act of steel blasphemy and show up with a '32 Ford with a Nissan SR20DET powering it just so it won't be the same as what everyone else has.

Then sometimes I see a car that reminds me of what this combination is all about. In spite of a few modern touches like an electric fan, this is one of the orginals, the cars that the me-too street rods are immitating. The builder did this swap in the '50s, back when a smallblock Chevy was new and exotic rather than something anybody can find by the dozen at Pull-A-Part. Now it's restored and out cruising the streets again.

A work in progress shot of the Dart 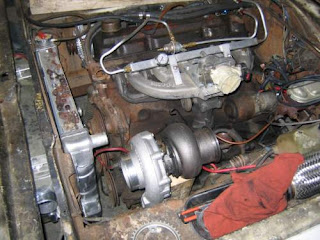 The guys at AutoFab Motorsports have been making progress with the Dart. They've made a J-pipe that mounts the turbo to the manifold, with a flex coupling in the middle of the pipe to deal with heat expansion. The motor mount has been notched to clear the pipe. They'll be building a support bracket so that the J-pipe will not carry any of the turbo's weight. Red hot steel isn't very good at holding up a 25 lb turbo.

I've been somewhat surprised at how much room this installation is taking up. A slant six has a lot of room under the hood stock. I never thought it was possible to pick a turbo that would crowd the engine bay, but once the plumbing's in place, this is going to be a tight squeeze.

Speaking of plumbing, I found out the hard way that a standard T4 turbo flange and a divided T4 turbo flange do not have the same bolt pattern. I had assumed the only difference was that one flange was split down the middle and one was not. Oops.

In case you're wondering, the gear-like object that doesn't quite look right for a gear is a Ford EDIS wheel. Wayne found it on a Mustang. It has three bolts to attach it to a crank pulley, and we may try putting it on the Dart.

Normally, it's uplifting to hear how someone has overcome huge obstacles to do something seemingly impossible. I'm not, however, quite sure how to feel about a man who's learned to drive with no arms and one leg and then used his talent to lead police on a 120 mph chase and rack up one of the largest collections of traffic violations in his county. There's something to be said for a guy who can drive a stick shift like that in an age where many people can't even drive one with a full set of limbs.

I guess that goes to show that sometimes great talent doesn't go with great moral character. Sometimes great scumbags get great talent too. Kind of ties into what C.S. Lewis said in The Screwtape Letters - that great sinners need great virtues to be effective sinners.

It's starting to become an annual tradition. Gas prices go up in the spring, and somebody starts circulating a hairbrained idea on how to coax them back down. Some of them have shown a perverse sort of creativity in how the author thinks it might be possible to lower gas prices without actually, well, using less gas. Some past versions have included only buying from one company, or buying just a gallon or so at a time. The "Buy only from one company" at least had some sort of semi-rational justification, while the idea behind buying in smaller quantities left me completely perplexed as to how anyone thought it would do anything.

This year, I see the bad ideas are back to the basics, a call for not buying gas on one specific day, presumably just either buying the same amount of gas a day earlier or later. Still a worthless idea. The only way to spend less on gas is to use less gas.