Luckily I cut my hair short, or I'd try pulling it out.

So the left headlight on the Corvette got stuck down this morning. I knew the teeth on its drive motor had a bit of damage from an earlier incedent involving a stuck screw, so I had a new set of bronze gears ready to go to replace the more fragile plastic ones. So, after about an hour and a half of work on the headlight, where I discovered that bronze small gears need to be pressed onto their shaft, I get the headlight motor assembly back together...

Only to find it's something else and I still only have one light flipping up.

A picture of the crank trigger wheel Still need to get the bracket and sensor in place, and the wheel will be painted in the final version. Normally I don't plug a project from work like this, but I used my '66 Dodge Dart for this article on how to install trigger wheels when rolling out a new product line.

"The suckiest car ever to win the Challenge" 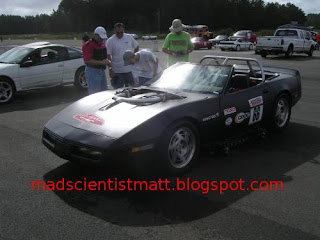 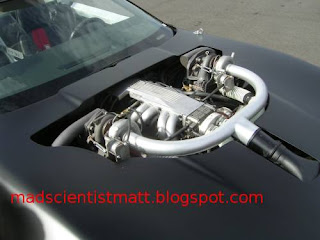 Here are some belated pictures of the $2007 Challenge winner. Team Cheaparal took a 1986 Corvette that they scored for $1,400 (it had been rolled; they had before and after shots to prove it) and put twin turbos on it. That alone would have been pretty impressive. But it's what they did after that which was probably the deciding factor: They made it into a sucker car. 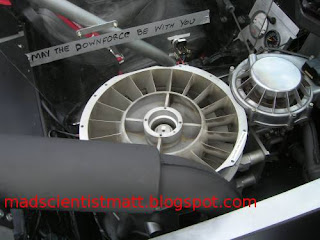 This is what was sitting where the passenger seat used to be: A surplus cooling fan off an M1 tank, powered by a snowmobile engine. This setup didn't seem to always work, but when it did, it generated over 1000 lbs of downforce, enabling it to rip through the autocross course like I couldn't believe, trailing a 12 foot high plume of dust and making a weird jet engine like sound.
It's a pity the drags were rained out, as I'd have been very interested to see what it ran. The builders didn't know, either - it had never been on a dragstrip.

I've seen a few "ghost driving" videos before, but this takes it to a whole new level. Set a brick on the accelerator, lock the wheel to one side, get out of the car... and change a tire while the car is still in motion? It's worth seeing for yourself. I wonder if Legends cars use normal lugnuts or knock-off wheels.

One thumb down for a vendor: Books4Cars.com

Ok, so some of my longtime readers may have wondered if I've sold out recently, with Spectre sponsoring my intake plumbing, and my taking a job in the automotive aftermarket. A lot of my earlier posts were backyard tech, and now a lot of it has just been, "I bought this part from such and such, and it's a good part." Worried that my blog is becoming like an ad-driven magazine that always praises the products in its stories?

Well, now I have a vendor to complain about: Books4Cars.com.

I was shopping for a Corvette factory service manual, and their website had the factory service manual for about $20 less than Corvette restoration houses. So I decided to order from them. After my order, I received a note that it was out of stock and they'd get another order in soon. Ok, that's not too bad; they were pretty prompt about it.

I emailed them checking up on the order, and they didn't respond, even after two emails. I can understand losing an email, but I was kind of disappointed they didn't answer. Then, the book shows up - and it's not a new one, but a well-worn example from a dealership. Now, the Books4Cars website does say, "Some publications may be used." But they don't have the decency to tell you which books they stock are used and which aren't, and guessing by the price, I was expecting they'd just picked up some new manuals at some kind of volume discount, rather than a used manual at a nearly new price.

To their credit, they didn't charge my card until they had the book, and the book is servicable. But I wish they'd tell you whether you're getting a new or a used book before you order.

Haven't heard about my Dodge Dart for a while, have you? This one is going to be pretty short, for now: I put a crank trigger wheel on it yesterday. Haven't mounted the sensor on it yet, but that's coming next, probably using a VR sensor meant for a '94 Saturn crankshaft position sensor. It's for an upcoming article on the DIYAutoTune.com website, so there is going to be a long, detailed how-to about this there.

Somebody finally brought one to the $2007 Challenge.

I knew something interesting was going to happen when I saw a group of guys in hockey uniforms gathered around an enclosed trailer. One of them, who also sported a mullet wig, a painted on moustache, and retro sunglasses, was using a PA system to announce what he promised to be the most spectacular car ever brought to a Grassroots Motorsports Challenge. 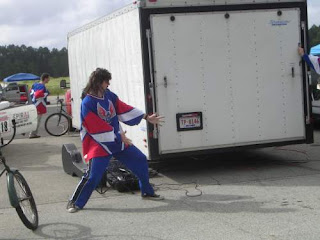 The doors opened, revealing that they had a smoke machine inside the trailer. I could just make out a pair of headlights through the smoke, and the sound of a V8 engine firing up. But then I saw the badge on the front of the car, and I couldn't believe my eyes. 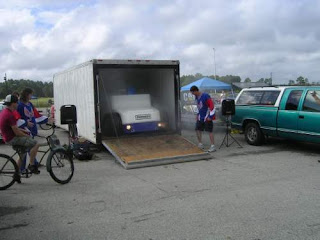 Sure enough, it wasn't a car that rolled out of the trailer. It was a Zamboni ice resurfacer on race tires! 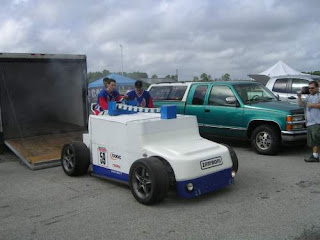 There's been a long-standing rule in the GRM Challenge that you can bring a Zamboni. It's kind of been an inside joke. But until this year, nobody had ever taken them up on this. And I hadn't expected them to take it to this level... 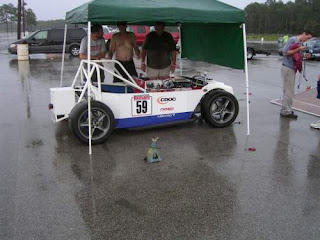 Not only did they bring a Zamboni, but the upper part of the ice tank lifted off, revealing that there was a race car on Zamboni frame rails, with Miata suspension front and rear, and nitrous 5.0 power in between. Wow. Engine problems kept it from running in the autocross until it had been rained out, so they put in a run on the slick pavement just to get a time. Good call.

There's a Challenge video on YouTube that starts with the Zamboni introduction.

The Yugo did not make it.,. 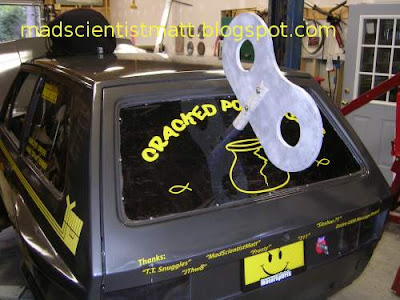 Seriously, the short version is that after trying two different Megasquirts and two different intakes, we tried to put it back to the original Motronic engine management system. While that did get it started, the Yugo belched steam out the exhaust and wouldn't run well. It looked as if it had blown a head gasket. And this was at 4:45 PM the day of the Challenge. We decided to call it quits and head on down without the Yugo. Just for giggles (and because Paul and I thought we might leave the Challenge at different times or in different directions), we put my Corvette on the trailer and towed it down with Paul's truck. Had a lot of people think that the Corvette was an entrant.

I've been busy with several different things recently, and haven't had much time to blog. One of those things was that I'm on a $2007 Challenge crew, working with Paul Fenner on his injected Yugo project. I'm heading off to the Challenge tomorrow. I'll be sure to bring back pictures!